Deka works at a sushi restaurant. They want me to know that and they tell me they want to come off as vulnerable as possible.

Deka sits on the edge of their roommate’s bed, clutching an oversized stuffed koala they have lovingly named Burp Chanel West Coast Rodriguez. they’re still situating themself, surrounded by pillows and looking for the perfect mix. Deka has finally created the optimal space to share some of the things it would’ve taken me a while to otherwise learn about them, they deliver the first few statements about themself in just above a whisper.

“My name is Deka, I am a first generation Somali-American fashion designer creating one-off custom pieces under the name Provocant Yute.”

The mix playing in the background switches from bombastic to relaxed, each track backing up Deka’s narration of life lessons; their affinity for Sega Bodega and not taking themself too seriously.

Coming from a strict Muslim household they describe growing up feeling alienated by American culture. Despite being a very curious kid, their rigid upbringing allowed them very little opportunity for experimentation. What influences them now is just the freedom to create.

Deka describes a moment of self-discovery while visiting the area of Nairobi their mother lived, after being displaced by the civil war in Somalia. They had taken a special interest in the alterations district where a cluster of twenty shops stood offering similar services. After some finessing by their aunt, they found their way into an apprenticeship with a fairly conservative tailor. 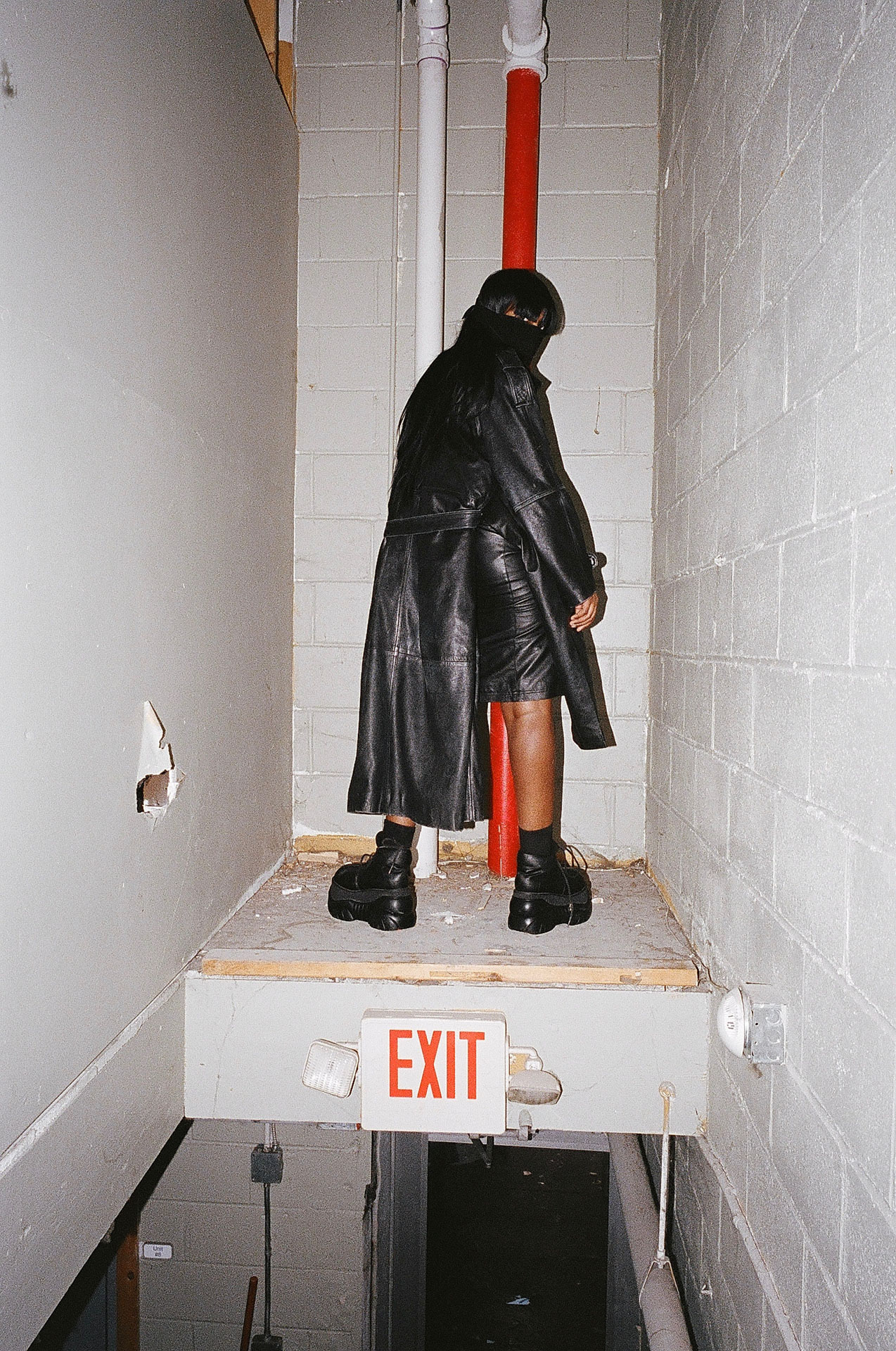 “He only spoke Swahili and French and I only spoke Somali and English, so we just communicated through body motions.”

Deka describes sketching two bell sleeves connected purely by a high turtleneck and presenting it to him. After grunting at the garment’s impracticality, he helped them construct their first piece of clothing. Deka stresses that this is the only formal training they have ever received and is otherwise self-taught. Over time, they have grown more and more confident bringing to life their concepts that are deemed irrational by industry standards. Deka tells me about working with a local Minneapolis cobbler to create the transparent wedge heels for our shoot. The left foot filled with chain links, the right filled with fingernail clippings from their closest friends. I didn’t need to hear much more, I already understood the headache that went into this collaboration.

Deka never introduces themself as a DJ but it seems to be implied. Since stepping into the River Lofts—a deceivingly large art and gallery space inhabited by a cross section of the Minneapolis arts scene—there has been an eclectic club mix consistently blasting from the speakers. The sonics are accompanied by muted visuals of Bad Girls Club and Gothic King Cobra YouTube videos.

Deka’s foray into DJing sounds more like a necessity than a fun hobby.

“Specifically in Minneapolis, there weren’t really a lot of femme DJs who were playing music that interested me. I wanted to hear music that was a lot more experimental when I went out; I needed to be a DJ.”

I notice by the end of our conversation Deka had ditched Burp Chanel West Coast Rodriguez and when I ask them if they have anything else to share, they verbally respond the loudest they have been the entire time, “You know what? I hate the phrase, ‘there is no new idea under the sun.’ I’ve made things that I don’t think anyone else has made before and I will continue to do that.”

Fast forward through a full day of shooting, a Light Asylum show at Loring Bar and a 5am afterparty situation, Deka texts me a song they found time to make. they’re excited, the first vocals they’ve laid down since “escapist.” The work in progress track features Deka’s breathy vocals seamlessly switching from Somali to English, laced over a spooky production by their studio mate, Frankie. It’s new to me and it’s a banger.